If you are interested in current positions with iDesign, please visit Careers

If you are interested in current positions with iDesign, please visit Careers

Virtual classes and programs are tapping new revenue streams and preparing faculty for the future of legal education.

It's like the opening titles of The Brady Bunch, said University of Dayton School of Law Dean Andrew Strauss as he explains the online portal (shown above) for its new hybrid Juris Doctor (J.D.) degree.

But instead of the cast of a family sitcom, the grid will be populated by the faces of students attending a law school class in real-time — from wherever in the world they happen to be.

Dayton is one of a handful of law schools to get approval from the American Bar Association (ABA) to offer a J.D. almost entirely online, which it will launch in August. Students will take classes online and visit campus one week each semester for intensive sessions. The move is part of a shift underway in legal education that has institutions attempting to stem or stave off enrollment declines by offering programs to prospective students in a wide array of professions and locations.

Online education is expected to play an important role, and not just for J.D.s. To expand their numbers and gear up faculty and staff for the future of online legal education, law schools are adding virtual master's degrees for non-lawyers who need legal skills (MLS or MSL) and master of laws (LL.M.) degrees targeting foreign lawyers who want to learn U.S. law or lawyers who want to specialize.

"As enrollments in the regular J.D. programs decline, law schools have some excess capacity and a need to look for other revenue," said Barry Currier, managing director at the ABA. While the expansion has mostly focused on in-person programs, he said there has been "an increasing use" of online technology.

"Law school is not always located near where people who want this kind of training are," he said. "It's typically not 22-year-old law students who just graduated college. They're people who are out there in the workforce looking for training … and don't have the ability to move to where the programs are."

Yet the number of students enrolled in non-J.D. online legal programs is still small — about 5,600 — relative the more than 111,000 students pursuing J.D.s.

The change will be gradual. In the last 12 months, the ABA reviewed 38 proposed non-J.D. programs, 20 of which were online while 18 were hybrid. (The ABA reviews non-J.D. programs to make sure they don't interfere with the law school's ability to offer a J.D., a process called acquiescence.)

The need for the type of interactive online portal Dayton's Strauss describes comes from the emphasis on back-and-forth exchanges in law classrooms. That's especially true in JD programs, where students are expected to apply what they're learning in real time through the Socratic method.

In the traditional classroom setting, students are required to participate on-demand, such as by showing they know how to cross-examine witnesses or present an opening argument.

"Until we had a platform and also knowledge about how to create this curriculum in an online environment, it just wasn't a good a fit," said Elizabeth Boals, assistant dean for part-time and online education at American University's Washington College of Law. "We're moving into a place where it's a better fit."

That means being able to conduct some of the online classes in real-time, which distance learning technology can now accommodate. Planning for the pre-recorded portions is also important.

"The one thing I don't think you can do is just take a residential class and plop it in an online platform," Boals said. "It's a different way of teaching, and it requires you to plan much further in advance. It requires you to build in constant assessment of students to ensure they're engaged and they're learning the material."

American is adding an online MLS, which will join its existing hybrid LL.M. degree in international human rights and humanitarian law. It is one of several law schools in the last few years to add online options to address the growing need for legal knowledge among people who aren't lawyers.

In addition to its online J.D., Dayton is adding an online MSL in patents this summer. And it launched an online and residential MSL in government contracting and procurement law in 2017.

"You don't want to have to run to lawyers every single time there's a question," Strauss said. "As law becomes more and more specialized and as legal services are more and more accepted, it's important that the knowledge is disseminated in different fields."

Also at issue is Dayton's desire to keep its J.D. program small to focus on quality improvements. It also recently added an online LL.M. degree in American and transnational law, tailored to international students.

Lewis & Clark Law School is adding an online LL.M. degree in environmental, natural resources and energy law for people who have completed JD programs and want to specialize in that topic.

Located in Portland, Oregon, it is one of the top-ranked environmental law programs in the country. But many prospective students are already working in the legal profession and can't swing a move to the Pacific Northwest, said Janice Weis, associate dean and director of the environmental, natural resources and energy law program.

"It seemed to us that (the LL.M.) market was sort of primed for distance learning because of the challenges of packing up and moving to our campus," she said, adding that the non-law master's market is expressing similar interest.

Andrew Hermalyn, president of university partnerships and services at 2U, an online program manager (OPM), agrees. "Students don't necessarily want to quit their jobs, pick up their lives and relocate in order to pursue a top-tier graduate program," he told Education Dive via email. He credits an uptick in online legal education, particularly in non-J.D. programs, to the demand for legal knowledge in other industries.

The OPM has partnered with Dayton on its online J.D. and with American, Fordham, Pepperdine and Washington universities on non-J.D. online programs.

Lewis & Clark is working with the OPM iLaw on market research, instructional design, marketing and candidate generation, and application and enrollment management for its online LL.M. Once the program is up and running this fall, it will help with operations, too.

Law schools are looking online for several reasons. For one, they are seeking new revenue streams well beyond their physical campuses. The ABA recently increased the number of online credit hours that can count toward a J.D., and it has let a handful of colleges offer the degree mostly online. The regulatory environment for industries is also heightening, making legal knowledge more in demand. And across higher ed, colleges are taking a more strategic approach to online learning.

"This will probably eventually be remembered as a period where … we moved into an online world for legal education," Dayton's Strauss said.

Some law schools may see legal education headed online and begin offering more classes or degrees through distance learning to familiarize faculty with what it takes to offer virtual programs, said Paxton Riter, co-founder and CEO of iDesign, an OPM that specializes in instructional design.

"(They're) looking to begin to get internal buy-in around online education so they're ready to go when the day comes" that they, too, can offer online J.D.s, he said.

Riter said his firm is talking with five to 10 colleges about adding online legal programs, though he notes it's still "a very nascent market" and that where J.D.s are concerned, hybrid programs will likely "reign supreme" in the long term. The company is working with Emory University's School of Law on its online juris master, which is similar to an MLS or MSL by targeting people who aren't lawyers but need legal skills.

Lewis & Clark's Weis said an online J.D. isn't a priority right now. "(Online) is new to us, and I think our faculty will want to see how the LL.M. program goes," she said. "We're definitely being proactive about watching the market trends, and we may consider that at some point." An MSL-type program, she said, could be next.

Some of the online classes will be available to J.D. students who may need to take a course while they are away from campus doing internships. "That will give us a better sense of how that's landing with the faculty, how that's feeling in terms of (online) J.D. education," she said.

The market for the full range of online legal education programs is still young. "Schools are certainly doing homework before they launch them," the ABA's Currier said. "But it remains to be seen precisely which programs the market thinks are important."

Hermalyn said 2U is eyeing legal education as a growth area. As one example, it recently extended its contract with Washington University in St. Louis' School of Law to offer online legal education through 2033.

For Dayton and other institutions, just because going online is possible doesn't mean it's a given. Yet they are optimistic about the opportunities for assessment and for bringing legal education to a wide range of students online — including the ones on their campuses already.

"I think that in many ways (online) pedagogy will be superior, and we're going to be doing a lot of assessment," Strauss said. "And if that is in fact the case, then I think (faculty) will begin using it more and more for the residential classes. They'll flip the classroom and use that to supplement what they're doing in (the residential) class with the students." 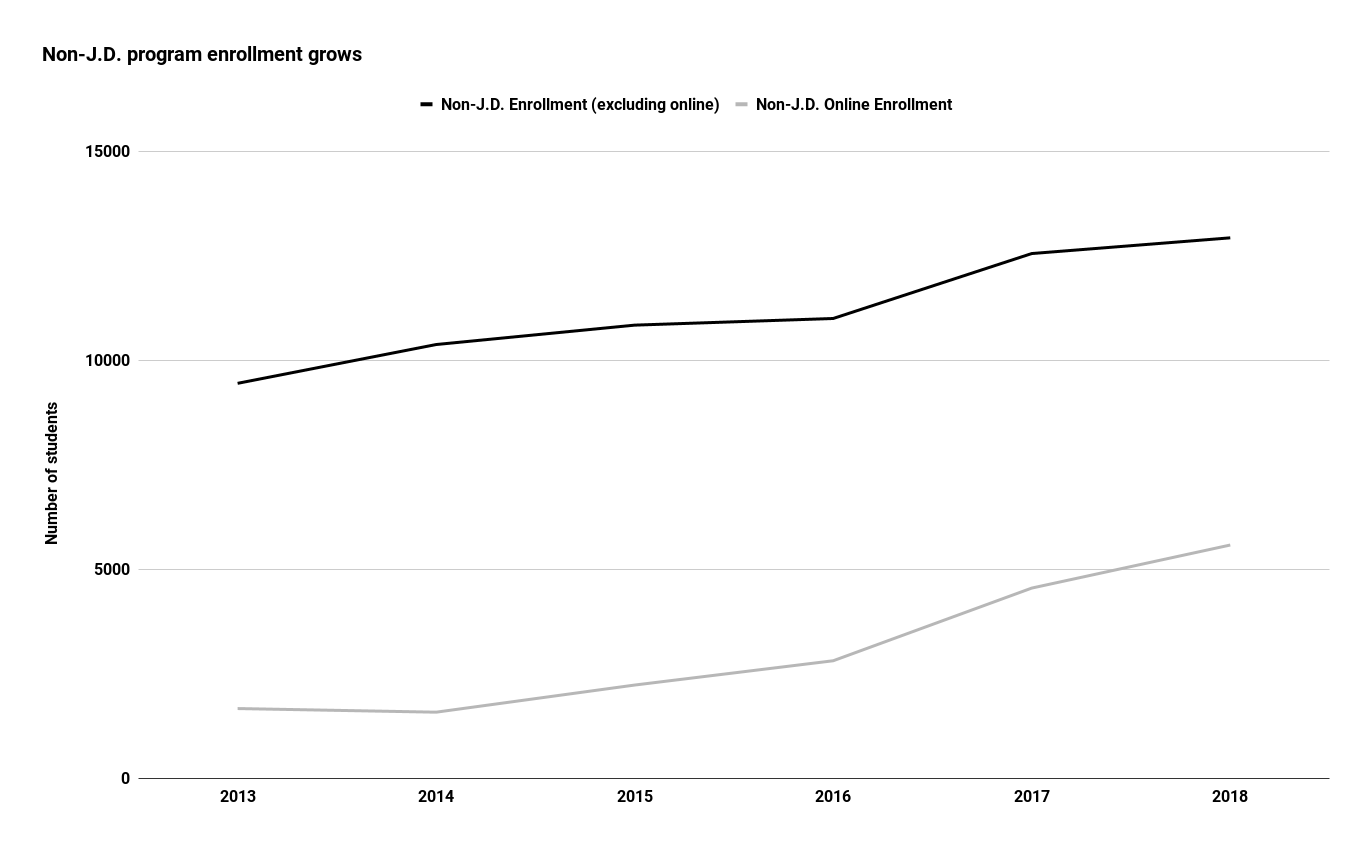 iDesign partners with colleges and universities to build, grow and support online and blended programs. We are passionate about helping faculty harness the potential of emerging technologies to design courses and degrees that make an impact, whether they are fully online, flipped, blended, adaptive, or competency-based. Our unbundled, fee-for-service model is rooted in a commitment to flexibility and institutional autonomy, while our analytics platform supports continuous improvement through rigorous measurement of student engagement and course quality. From statewide university systems to private colleges, our custom solutions pair instructional design with technologies to enable great teaching. To learn more, please visit www.idesignedu.org.